The Basilisk is an Archfiend that was once a blind man who desired to see the woman he loved. His wish turned him into a monster with eyes on his wings.

From birth, he was a man plagued with poor health.

In time, illness claimed even his sight.

Even navigating the corridors of his long-familiar home proved a challenge in the dark.

His days became an exhausting struggle to hone his remaining senses.

Total, desperate dependence, it seems, is a far greater teacher than any who enjoy the gift of sight can fathom.

And yet preternatural hearing could only do so much. The man's life remained a difficult one.

Unable to shoulder the burden of his care alone, his parents petitioned their fellow villagers for aid.

All who were asked begged off from the onerous task - all save for one woman.

Like the man, this woman scarcely left her home, though it was deep insecurity about her appearance that kept her housebound.

The selfless care she offered the man was exemplary.

Through the warmth of her touch, the man rediscovered the will to live.

As if feeding on this new found joy, his body began a miraculous recovery.

The woman, too, was healed by her relationship with the man.

She need never feel unsure of her appearance in the company of a blind man.

As the months passed, the former shut-ins began to spend more and more time out in the world.

Their affections grew into a deep, abiding love.

One day, the man gave voice to a burgeoning hope of his.

"Perhaps the day will come when I'll be able to look upon your face, my love." 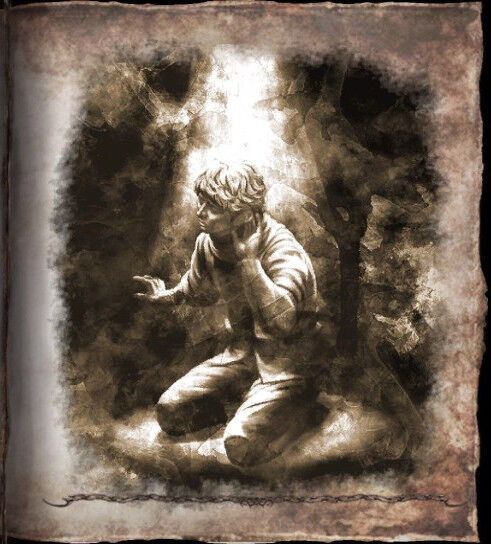 In truth, patches of light had already begun to pierce the darkness covering the man's convalescing eyes.

That optimistic comment saw the woman's face twist into a horrific grimace.

And there the man's recovery ended.

Instead, his health began to deteriorate at a frightening pace. His days were wracked with pain.

Light forever left his eyes, and now even his nose was perpetually stopped. Festering boils left his tongue useless

Only his hearing remained sharp as ever before, and the woman's whispered professions of love never ceased.

Half a year on, the man sensed his end approaching.

He could die happy, thought he, if only he could catch one glimpse of his beloved.

The mysterious voice that next reached his ear was not that of the woman's.

"Pay a fitting price," it spoke, "and you will have what you desire."

Yet the man had nothing left to give.

Yearning soured into desperation in his breast, and the man knew no peace.

Seeing her charge in anguish, the woman knew that death was not far off.

As if confessing her sins, she told the man of what she had done.

In order to ensure that he remained forever hers, she had replaced his medicine with another substance.

Her fears that his love for her would die upon seeing her face drove her to make certain his love outlived his body.

The man was cut to the quick by this grim admission.

His doting nurse - his beloved - had done him harm to secure his love.

How could she ever think that sight could quench his love for her?

It was not her appearance he had come to love, but her selfless, caring soul.

As his desperation reached its peak, he knew he had found his sacrifice.

He gave her gladly.

The man's form warped and shifted into something hideous.

His keen ears grew into wings, carrying him aloft.

His belly split at the sternum, and from within him a giant eye peered out.

It was an organ crafted from the viscera putrefied by the woman's poisons.

The first sight to grace his new-born eye was that of his former love, writhing in the final agonizing throes of death.

In that moment, his desire to look upon her face and his desire for revenge met.

Even he knew not which was the stronger...

Freedom finally his, the man took to the sky.

He made for the horizon without so much as a glance back. The world was finally his to explore.

All that remained behind him now was the husk of a woman he had both loved and hated to death.

Community content is available under CC-BY-SA unless otherwise noted.
Advertisement