The Beelzebub is an Archfiend that was too proud to die in squalor, and so agreed to be transformed in order to maintain his pride and station. Now he roams the land, eagerly reclaiming what he believes is his by rights.

The free DLC which includes Beelzebub and Cat Sith was released in Japan on the 6th of June. It, along with Cat Sith, were released in North America on August 6th and in Europe on the 7th of August.

Once there lived an aristocrat of exceptional pride.

He left all but the most important matters of his daily life to his servants.

"How ought a man of my station be expected to perform such menial tasks?"
Such was ever his refrain.

But even the aristocracy aren't exempt from the caprices of Lady Fate. His opulent life would not last forever.
Struck barren by disaster, the fields of his lands produced no grain, nor could his people pay their taxes. The aristocrat was ruined.

And yet...
Even destitute, the man's prideful attitude never faltered.

Gone were the servants that tended to his needs, yet still he refused to shoulder that burden himself.

Still the words echoed in his empty halls: "How ought a man of my station be expected to perform such menial tasks?"
"Someone take care of it."

But the man was not a complete fool.
He knew very well that no such someone remained. Yet, he could not help but speak the words.

The fallen noble's manor soon fell in turn, degrading into a mountain of rubbish. A den of flies.

Perhaps due to this filth, the aristocrat took ill.

Still the same refrain continued.
"Someone bring me medicine. Someone fetch the finest doctor in the land."

The man's pride would soon quite literally be the death of him.

As his condition worsened, his haughty commands became little more than hoarse groans.
With the last of his strength, he spoke once more.

"How ought a man of my station be expected to die in such ignominy?"
"Someone save me." 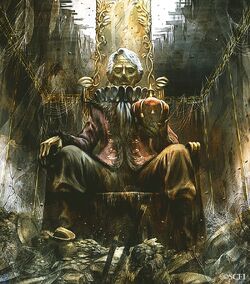 His final plea came through teeth gritted so tightly they could have splintered. The man, once proud enough to wish death before dishonor, finally relinquished the motto that had come to define his being. These daggers to his pride, his final words, were spoken in less than a whisper, drowned out by the beating wings of the circling flies.

No one could have heard his plea, even had anyone remained to listen.
Yet a strange reply came from the empty darkness.

"I shall grant your wish, should you be prepared to pay its price."

A strange vision appeared before the delirious nobleman.
The voice's source was a chalice of pure white, floating in mid-air.

As his strength returned, he spoke his orders in a crisp, loud shout.
"Someone fetch me my supper!"

But his men had long deserted him. Imagine, a man of his stature, with no menials? It simply would not do...
The wait for dinner wasn't long. A host of new servants had jumped to attention. Whatever the man's orders, these new stewards gladly obliged.

It was almost as if the man had his grand old household back.
The sole difference was that these new servants weren't human.

It was the bloated swarms of flies that infested the manor who served its master now. He never thought of his human servants again. He no longer saw any virtue in the service of man.

With time, even the nobleman's visage came to resemble that of the flies around him.

But he remains unaware of his transformation.
Unaware that he has lost human speech. That he will soon lose human thought as well.
He speaks the tongue of the flies, and sees the world through their eyes now.

The man believed keeping servants was necessary to safeguard his pride. So keen was he to stand above all men, he cared not as his own body was transformed into something baser. For that was the true price of his wish.

The proud aristocrat had attained a new form. New power. A new title as the fly king.
And now he travels his former lands with servants in tow...

Eager to reclaim what is his by rights.

The fight starts off with him summoning his throne and he sits down and disappears into a fog of fly swarms. He is invulnerable while invisible but the fly swarm can be followed and his position can be seen on the mini-map. After this he launches volleys of small fly swarms that can knockdown the player. He will constantly have fly swarms around him making it very hard to use melee attacks on him. His attacks are much like the Elven Queen.

Retrieved from "https://soulsacrifice.fandom.com/wiki/Beelzebub?oldid=21247"
Community content is available under CC-BY-SA unless otherwise noted.