There was a town frequently troubled by bandit raids.

Fortunately it had a formidable guardsman, who loved his place of birth.

With his two fierce hunting dogs besides him, the guardsman would stand at the town gates, repelling any would-be raiders. The trio became well known for their ferocity in battle.

His achievements led to the offer of more prestigious roles, but the guardsman rejected them all.

Nothing could bring him more happiness or pride than protecting his hometown.

Little did they know that his happiness was not to last...

The town was struck by a terrible disease that spread rapidly, proving fatal those infected.

Scared people left in droves, and the town emptied, its vitality sapped away.

The guardsman could not stand to watch his hometown wither away. He had devoted his life to protecting this town, and feared that he now had little reason to live.

Those attempting to leave, he deemed cowards, and as time went on, his feelings towards them hardened.

He would not see them leave. He could hardly guard a town with no people, after all. Unthinkable as it would once have seemed, he turned on his fellow townspeople, using fear and brute force to ensure they did not leave the town.

Even as the disease continued to spread, the guardsman stuck to his course of action. He was long lost to the depths of insanity.

One evening, bandits launched a raid on the town. The guardsman, however was ready for them.

His face twisted with ecstasy. This was what he lived for, after all...

As the bandits tried to flee, the guardsman was stuck by a spear. From a place where no bandit could have been...from behind him. From the town he had devoted his life to protecting...

The townspeople had resolved to stand up against the guardsman's tyranny, and struck him from behind.

As the guardsman, lay there, his consciousness dimming, a strange light lapped at his eyes.

A chalice floated before him, bathed in a cool white glow.

"Make an offering. Give me what is most precious to you, and your wish shall be granted..."

Mesmerized by a chalice's words, the guardsman ordered his dogs to kill everyone in town, friend and foe alike. He turned on the very people he had spent a lifetime protecting. Those he held dearest were now his offering.

A giant mound of corpses was amassed. Beside it, the guardsman stood weeping. The howls of a mad dog echoed, and then the area was shrouded in a black glow.

From the pools of blood that had gathered, a monster rose. A monster that defied description...

Legend has it that the town still exists somewhere in the world.

Appearance-wise, unchanged in years, and still the same as during the guardsman's heyday.

They say he can be found there still, standing guard the gate.

He may let you enter, but he certainly won't let you leave...

Cerberus has two sets of attacks depending on if its standing on two legs or four:

Taking first major damage : "I was proud of this city."

"It made life worth living."

"Why did everyone leave?"

"Was it really that bad?"

"Is that reason enough to leave?" 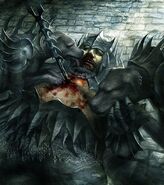 Retrieved from "https://soulsacrifice.fandom.com/wiki/Cerberus?oldid=21844"
Community content is available under CC-BY-SA unless otherwise noted.