The bottom of the valley had once lain barren and lifeless. Then a single seed floated down, and before long a dandelion appeared.

Within these confines, only a certain number dandelions could thrive. Within all living things is a desire to leave as many offspring as possible. But the dandelion of the valley could not satisfy this need. One day, a woman lost her footing and fell from one of the cliffs into the valley.

Now, a fall from such a great height would normally prove fatal, but the woman landed on a bed of dandelions and survived. Though she was covered in blood, she did not appear to be injured... When the woman came to her senses, she gazed around her in astonishment.

She saw the impossibility of clawing her way out. Walking the valley floor, she found naught but dead ends. She was trapped. The relief she had felt upon realization of her survival, quickly turned to anxiety.

Yet it was perhaps... for the best. Even if she managed to climb out of the valley, her life was still as good as over. The woman thought about all she had been through... For as long as she could remember, she had wanted children.

But her hoped had gone unanswered, and the years had gone by without her ever becoming a mother. Upon seeing a woman with children, she seethed with envy. Unable to control her emotions, she had resorted to measures somewhat drastic to fulfill her desire. The fate that had now befallen her must be divine justice. The woman grew more frail. If she should ever be reborn, she hoped she would have children in her next life. The woman prayed as her eyes closed.

No sooner had her eyes shut, than she heard a curious sound. She was not imagining it. She could hear it clearly. When she opened her eyes, she saw a mysterious chalice floating in the air. It told her she could have her heart's desire, if she was willing to pay the price. As her world grew dim, the woman made her wish. A dandelion seed fell on the woman and in no time it began to grow. The flower's roots spread beneath the woman's skin and it drew nutrients from her blood as it blossomed.

The color and shape of the dandelion that grew from the woman's body was different from any flower that had been before. In finding each other, both woman and dandelion were changed.

An impossibility within the confines of that barren valley had occurred. Life had taken on a completely new form... A woman and a dandelion had merged.

Though the came from entirely different species, they shared the same desire to reproduce.

Flowers flourished all over the woman's body, eventually covering her in soft down of dandelion seeds.

These seeds separated from their stems and grew white wings which let them flutter in the air. Perhaps this had transpired from the instinctive desire within the seed to fly beyond the confines of the valley.

The seeds could fly about the valley on their own, but wanted to be close to the woman, and so nestled around her body. The woman felt a deep warmth within her.

She realized that these were her children now. She had finally become a mother. She called her children "elves." The woman and these elves made the valley their home.

A kind of kingdom for the dandelions.

She had all she desired, and began to forget the life she had once led outside the valley. Then one day, one of the elves attempted to scale the cliff face and escape the valley. The woman, now calling herself the Elven Queen, scolded her child, saying that none were permitted to leave. The woman knew that if her children began to leave the valley, she would awake from her beautiful dream. She dreaded to think what might then become of her. But the elves' curiosity remained strong, though the queen told them time and again not to stray from her sight. Then, unknown to his mother, one elf finally managed to climb out of the valley, and others soon followed in his wake. The queen was beside herself.

Some of the elves that had left the valley had not returned. She was terrified that something had happened to her children. She could not rest until she knew they were safe.

But she was aware that leaving the valley was dangerous.

She could not tell what would happen if she ventured back into the outside world.

Conflicting emotions raged within the woman.

In the end, her maternal instinct won out, and she decided that she must leave the valley.

She gathered all of her children and carried them on her back, forming a giant pair of wings. She flew out of the valley. As she flew through the air, she saw the familiar sight of the city where she had been born and raised. She had forgotten. Or rather she had tried to forget. But now the memories rushed back to her.

No doubt they had all been glad to see the back of her, for she had been a notorious kidnapper.

Now, the woman returned to the city of her birth.

She couldn't hold it in any longer. Her very blood called out.

There was no denying it. There was something special about human children. She still longed for one, deep down.

This dark desire overwhelmed her, and she began to search for children once again. In the old days, she considered this as natural as breathing. She had always been alert, always looking... She felt a tug of desire whenever she saw a child. If only he or she was her own... And then if she judged them worthy, she would take the child and treat it as her own. How many times had she done this? Ah... It had been the thirteenth attempt that ended in her fall. As she saw the child before her, she made up her mind. She would take this child with her back to the valley. Then she would let dandelions grow on its body. That way, a whole new type of elf would surely be born. This is how it began. And the Elven Queen continues to spirit children away to this day. 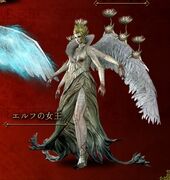 Retrieved from "https://soulsacrifice.fandom.com/wiki/Elven_Queen?oldid=21847"
Community content is available under CC-BY-SA unless otherwise noted.