A man once born into an illustrious house.
From a tender age, he became known for his handsome looks.

He also displayed keen intelligence and great skill at arms.

Great things were expected of him.
They said he would surely become a man of renown, a great name in history. 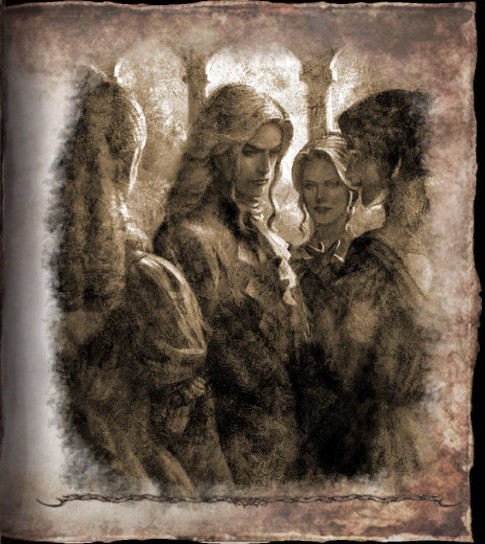 But soon enough, these expectation became source of misery to him.

Especially upsetting was the scrutiny that surrounded his love life.

He felt that his every move was watched and dissected. Simply talking to a lady would set rumors abuzz.

"Look at them together, is he courting her?"

This caused problems not only for him, but also his lady friends.
To put an end to the rumor and speculation, he cut himself off from female company.

But still they wouldn't leave him be.
Talk of marriage reached him almost everyday.

And he was soon sickened by the transparent politicking and scheming of the matches offered.

His continual declining of marriage offers only served to further fuel the rumor mill.

Even wilder gossip abounded, that he preferred the company of men.
Soon, he had reached his wit's end.

"Let me love whom I wish! When and whom I decide to marry is no business of theirs!"

"I never asked for all this attention!"
"They have no right to decide my future!"
"I just want to live in peace!"

Just as the mental pressure had peaked, a soft voice rang out and he saw before him a curious chalice.

"I shall grant your wish. For a price."

Beleaguered to his very soul, the man replied, "I'll pay any price. Grant my wish."

When he awoke, he found himself transformed. He had become a stone lying on the roadside.

For a moment, he panicked. "What is the meaning of this?"

However, as people passed by, he soon realized that his wish had been granted.

A stone on the roadside...

Not a soul paid any attention to the man who had become a stone.
Not a soul approached him.

Contented days passed in lukewarm detachment from the world.
The man who became a stone was happy.

Time passed without incident, but one particular day, a girl walked along the road.
Seeing the stone that was once a man, she walked slowly over and straightened him so that he lay evenly.

The man fell in love at first sight. He had never felt anything like it.

The irony didn't escape him.
Having become a stone in order to avoid people, he now wanted someone so badly that he felt his chest might burst.

But the man was simply a stone, capable of neither movement nor speech.

He pleaded in his anguish. "Please! let me be with her right now!"

And at that moment, he heard the voice again.
"I shall grant your wish. For a price."

The man screamed in a voice that wasn't a voice. "Grant my wish right now!"

The next moment, he began again to change.
First he grew into a torso, then arms and legs grew slowly back.

Driven by his will, the man began to regain his former shape.
But he was no longer the handsome youth that he had been.

The memory of his humanity was vague, leading to an imperfect recreation.

The contour of his body? The nasolabial fold?
The reach of his arms an the arch of his feet?

Again and again he struggled to reshape himself, but the more he tried, the stranger his body would become.
There was some semblance of his old self and yet he was completely different. He had become a monster part-human, part-stone.

In his crooked humiliation he went to meet the girl, but she fled at the sight of his debasement.
He was sullen.

As a man, people had always expected greatness of him.

There was always someone demanding something or exploiting him in some way.

Now he was a monster, he felt the pain of rejection for the first time.

And what it is to be truly alone.

From then on, he changed. He began to seek other people out.

The man who had once begged "Everyone leave me alone!" realized how spoiled he'd been.

Foolishness was all it was. The man who had become a monster now resented himself as much as others.

It's said that even now, this rocky phantom lurks by roadsides.
Patiently waiting for passers-by to approach...

Retrieved from "https://soulsacrifice.fandom.com/wiki/Gargoyle?oldid=21316"
Community content is available under CC-BY-SA unless otherwise noted.