This was once a wealthy nobleman who was in possession of huge tracts of land. Collecting a multitude of taxes and tithes, he had grown wealthy indeed.

He was particularly fond of one item he received. It was a golden statuette, depicting a monster, bird and human frolicking together.

The nobleman loved the statuette, and would spend with his every waking moment staring at it.

Servants claimed that they had seen him talking to the statue, embracing it, and sometimes, even licking and tasting it with his tongue.

One Day a bedraggled peasant asked for an audience with the nobleman.

He had come to beg for the return of his work. As it transpired that he had crafted the nobleman's beloved statuette.

But in fact, he had never intended to give the statuette away. He claimed it was dangerous, that people became slaves to it. That they desired it to become real... 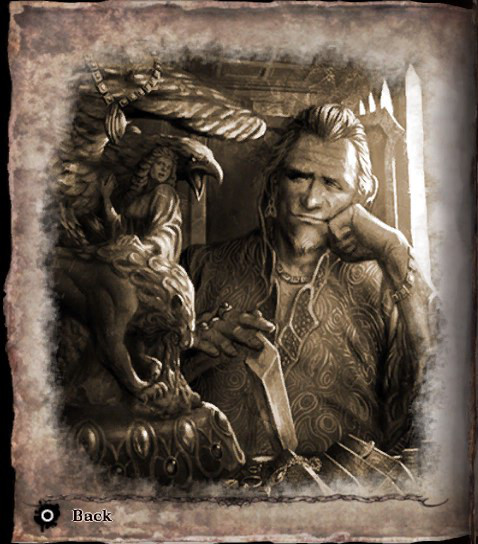 And he'd paid a terrible price.

The peasant rolled up his sleeves to reveal his skin. It was swollen and sore, but with no ordinary inflammation...

Tears welled up in the peasant's eyes as he begged for his statuette to be returned.

That nobleman took one look at the peasant, and gave a snort of laughter.

"How can I return this if it was never yours to begin with!?" "You own nothing. Everything in my land belongs to me."

The nobleman kicked the peasant to the floor and stamped on his head. He would not stop until the peasant agreed to give him everything he owned. Every last coin. The event acted as a spur for the nobleman's violent tendencies.

He became desperate to assert his authority in any way he could, and imposed even heavier taxes on his tenants.

His love for treasure grew and grew, but it was no longer enough to merely look. He demanded that platters of gold and silver coins were served at meal times, forcing himself to swallow them.

Eventually growing tired of suffering in silence, the peasants rose up against the nobleman. Looking to unleash their years of pent up rage, they advanced on the castle.

The nobleman's staff, aware that the time for civility had long passed, fled as soon as they saw the mob approach.

The peasants were desperate to capture the nobleman, but could not find him anywhere inside the castle.

It was then that one of their number heard a soft voice coming from the castle's treasure room. What the peasants saw was nothing short of a monster. A monster who had sold his soul for treasure.

The nobleman was no longer human in appearance.

His body all turned to treasure, the nobleman had become that which he so desired. It seemed his favorite gold statuette had taken possession of him.

Perhaps that was what he had wanted all along.

The monstrous nobleman turned on his peasants killing them all. Humanity had abandoned him. He thought about nothing but maintaining and adding to his hoard of treasure.

Apparently, this is still the case.

One must be careful when acquiring treasure. For this selfish beast will think nothing of using its sharp claws to tear it from your grasp...

The Griffin usually attacks from the air until one of its wings gets broken.

Retrieved from "https://soulsacrifice.fandom.com/wiki/Griffin?oldid=21317"
Community content is available under CC-BY-SA unless otherwise noted.