This monster is the Archfiend form of one of the main story characters Illecebra. After being defeated several times as sorcerer by Magusar and the author of the Librom journal Illecebra in Beginning of the End Ch. 4 finally reveals her "true form" and transforms into the Archfiend.
The reason behind this transformation was that her wish was granted by the Sacred Chalice. She wanted not to be alone any more and asked the Chalice to give her a daughter, a perfect copy of herself. As always the true cost of granting a wish was losing vital part of humanity and becoming monster as the result of it.

Illecebra has two stances, one standing up, and one when she is bent over backwards. The effect of most of her attacks vary depending on what random element she is using. After taking enough damage her element will randomly change to another. The element she is currently using is indicated by the colored mist surrounding her:

In either stance, she has a close range spinning swipe that deals damage and releases a geyser-like attacks with whatever element she's using. When she is bent over she uses the following attacks:

When Illecebra is standing she uses the following attacks: 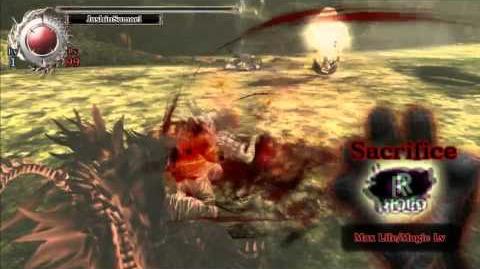 Retrieved from "https://soulsacrifice.fandom.com/wiki/Illecebra_(Archfiend)?oldid=21321"
Community content is available under CC-BY-SA unless otherwise noted.