There was once a land that was ruled by a young duke. He was known for his beautiful green eyes and insatiable carnal appetite. A palace maid had become the latest in a long string of liaisons.

The maid became pregnant, but didn't dare inform the Duke.

After all, the Duchess was a deeply jealous woman, and the maid felt sure this revelation could only lead to a terrible fate.

When her daughter was born, she had the same beautiful green eyes as her father. A feature passed down through the Duke's family for generations.

The child's first five years passed uneventfully. But then, something terrible happened. The Duke and Duchess discovered her existence. Now, though her mother was lowly, the girl had noble blood. Her existence could never be publicly acknowledged, but disposing of her was out of the question.

Thus the girl with her father's eyes was snatched from her low-born mother, and held captive in a hidden castle.

The castle had long been abandoned, and its interior resembled a maze. The girl was kept under observation at all times by men who called themselves her guards.

To hide the eyes that would have revealed her lineage, the girl was forced to wear an iron mask. Two horns protruded from the top, giving its wearer a distinctly sinister appearance.

The girl dreamed of being reunited with her mother. Even as she did so, the hatred she felt towards the Duke and Duchess intensified.

Just as this hatred swelled to a crescendo, the girl heard a distant distant voice.

"Do you wish to leave this place?"

She nodded. The disembodied voice went on. "Shall I give you the power to escape, then?"

The girl used the mysterious power given to her to escape the castle. She took off her iron mask, exposing her beautiful green eyes to the sun and bathing in its warmth.

Though the sheer joy of this moment threatened to overwhelm the girl, no tears were shed. After all, there were things she needed to do.

Setting out in search of her mother, the girl eventually managed to discover her whereabouts.

Finally, they would meet again.....

Unfortunately it was not to be a happy reunion, and would cause more resentment than ever.

Her mother had changed. She was extremely thin, with sunken cheeks and hair fell out in clumps.

Not appearing to see the girl, she simply intoned her daughter's name, her face contorted in a vacant, half-crazed smile.

She had lost her mind.

The girl took her mother's frail body in her arms, and fought back the tears. Now was not the time for crying.

It was the time for revenge.

The girl took the iron mask she had been forced to wear for so long and placed it over her face once more. It would serve to remind her of the reason she sought revenge.

Mask in place, the girl commenced her investigations.

It transpired that the Duchess, not satisfied with taking her daughter away from her, had also subjected the girl's mother to terrible abuse... 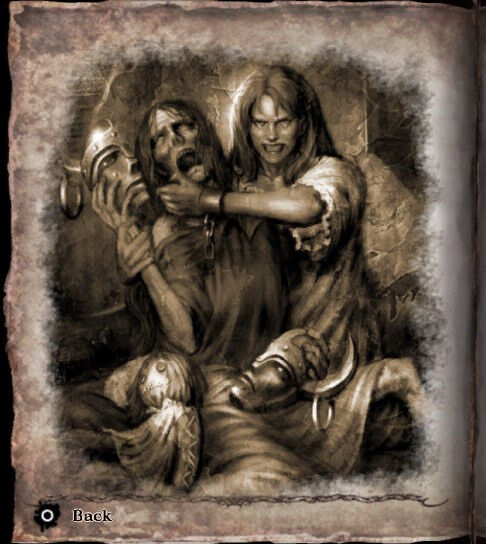 All while her father, the Duke, feigned ignorance.

The years of suffering had cost her mother her sanity.

The girl stayed with her mother at the convent, attending her every need. She felt sure she would eventually get a response.

This was not to be, however. Her mother didn't even know she was there.

After a while, the girl gave up, "Whatever she is, she is no longer human..."

Just then, the same voice heard in the castle came once more, from a strange chalice that emitted a curious white light.

"Do you want to make them pay for what they did to you mother?"

"Then you shall have to give me something. The most valuable thing you have."the voice said.

The girl did not have any possessions. Indeed there was only one thing she valued in the whole world.

She wasted no time in accepting the chalice's proposal. She would need it's power if she wanted her revenge.

Her face swelled and distorted, fusing with the iron mask that covered it. Within seconds, the once-beautiful girl was grotesque.

Her mother, sacrificed to gain her new power, became a giant axe with a warped blade.

She didn't even notice as her humanity seeped away forever.

The girl set off for the Duke's palace, giant matriarchal axe in her hands.

After an arduous journey, she arrived at her destination.

It goes without saying that the revenge exacted upon the Duke and Duchess was brutal.

The girl's hatred however, did not ease. Indeed, she felt more defeated than ever.

As she gazed down upon the giant axe that was stained red with blood, the girl had a dawning realization.

All she had ever wanted was an ordinary family, to know how it felt to have a mother and father who loved her...

A simple wish, but one that would never be realized. The sound of her mother's crazed laughter emanating from the axe was painful proof of that.

The monster that the girl became roams the land to this day,

consumed by these emotions with no one left to direct them towards.

Still, she will never be satisfied.

Her despondency is a maze with no exit. Such is the life she now leads.

Her desire for revenge never sated, she weeps in harmony with her mother's crazed laughter...

In the first phase of the fight it will run away from the players and hold its axe up, and will either heal itself or launch several homing cursed orbs. If the axe is hit several times while it is up it can be knocked out of the Minotaur's hands, confusing her for a while, allowing players to attack either it or its axe. After a moment, the Minotaur will turn toward her axe and rush for it to pick it up, hurting players in her path.

If the axe's cursed part is destroyed or Minotaur takes enough damage she will start using other attacks.

"I will find them. Mother, come with me."

"They shall pay with their lives. The ones who did this to mother..."

"I want my mother back! Not this muttering shell!"

"Why do you look at me like that? I am your daughter!"

"Recognise me! Don't look at me like that i beg you."

Minotaur artwork.
Add a photo to this gallery
Retrieved from "https://soulsacrifice.fandom.com/wiki/Minotaur?oldid=22241"
Community content is available under CC-BY-SA unless otherwise noted.