There was once a farm that harbored a terrible secret.

Countless sets of waxen wings could be seen, strewn all over.

The master of the farm was said to possess mysterious powers, these wings the result of sinister experiments.

Apparently none but he could manipulate the waxen wings. But then one day, he simply vanished.

The result of this was that the farm lay abandoned.

Some ventured there hoping to steal the wings, but no sooner did they touch them that the wax seared the flesh from their bones.

One day, a bedraggled and desperate man made his way to the farm.

Despite his appearance, he had once been a mighty king's most trusted courtier.

But at the same time, he had burned with his very own fierce ambition.

He plotted and schemed, dreaming of deposing the king and taking his place.

When the king's son and heir died in a tragic accident, the ruler was inconsolable.

His master distracted, the courtier seized his chance, and set his plans in motion.

One of the schemes involved the abandoned farm.

Since all who dwelt nearby were terrified of this sinister farm, the courtier thought that by dealing with it once and for all he could win the people's hearts.

This one tragic mistake was to bring about all the misfortune that followed.

The Kingdom's troops rallied to the courtier's cry, but none who marched on the farm returned alive.

The dark power of that enchanted wax had doubtless proved too much.

Yet terrified of appearing weak, the courtier persisted in his plan.

The tally of victims grew grimmer, and the courtier was held responsible for the tragedy. 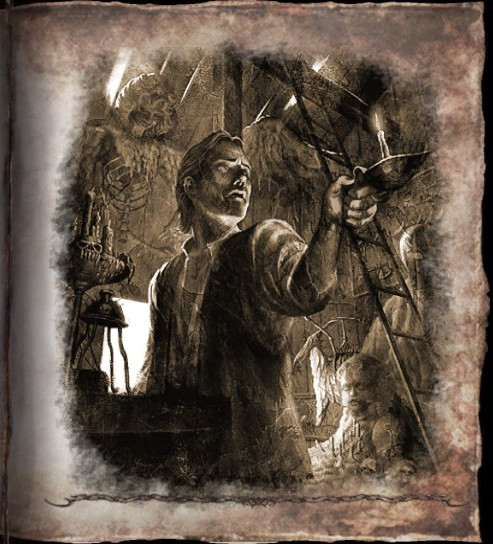 He knew this would mean death, and so fled before he could be captured.

The courtier traveled to the corners of the land, desperate to evade his pursuers.

Finally, irony was not lost on him, he was left with one last place to turn. The abandoned farm.

He knew better than anyone the danger posed by the enchanted wax and the wings formed from it.

But as soon as he laid eyes on the wings, his fear was all forgotten.

He desired only to make them his own.

With the power of flight, he would no longer have to fear those who hunted him.

Yet he knew that he was apt to lose his life the instant he touched them.

As he pondered the path he should take, his pursuers drew closer.

Knowing he was trapped, he steeled himself to take the wings.

The king's forces combed the farm, certain their quarry was close.

Then, just as the courtier reached his hand towards the pale wings, he let out a sharp cry.

A sharp pain shot from the nape of his neck.

It looked like he'd been bitten by an insect.

Though the pain had been slight, his howl was enough to alert his pursuers to his presence.

As he reached again for the wings, he felt a heavy blow strike him between the shoulder blades.

As his consciousness grew dim, the courtier saw a strange glow. A chalice floated in mid-air, emitting a white light. It spoke to him.

Irresistibly drawn to that voice, he obeyed its every word. The wings melted, the wax running over the body of the courtier as he lay prone.

His wish had been granted and he took flight. His pursuers gazed up agog.

It was only then that he became aware of his transfiguration.

He gazed down at his form, and saw that it was no longer that of a human.

A thick pale substance oozed over his flesh, and he had sprouted enormous wings.

When he finally saw his own face., he wondered if his new form had come from the fly that had bitten him before..

Whatever he was now, it was neither man nor beast.

With this pale fluid dripping from him. It looked as though he was fashioned from wax.

No longer a creature of flesh and blood, but reborn as a lurid tallow. This was the price that the courtier had paid.

The king tried again and again to vanquish the foul creature, but to no avail.

Some traces of the courtier still remained, post-transformation.

The desire to depose the king and take his place burns still now within the creature's breast.

Believing itself the ruler of all it surveys, this monstrosity looks down on the world  with haughty contempt.

To this day, it soars through the kingdom's skies, ever hunting.

Taking first major damage : "The game is up. I sought power but found only defeat."

Retrieved from "https://soulsacrifice.fandom.com/wiki/Pegasus?oldid=21036"
Community content is available under CC-BY-SA unless otherwise noted.