There was once a girl who lived a simple and austere life, as instructed by her parents.

Her father was a former soldier who had taken to drinking too much and was not barely able to move. Her mother made potions from the wings of moths, an occupation that caused many to view her with suspicion.

Desperate to avoid prying eyes, the family set up home in a remote, dilapidated cottage several miles from the nearest town.

As soon as the girl was of age, her mother taught her how to make the potions. After all, they needed the money from selling these potions to support her father’s habit.

Her father worked her mother to the bone, supporting his drinking. Her mother in turn treated her daughter as a slave…

In such a situation, the girl couldn’t even imagine falling in love, let alone marriage. Her parents had forbidden her from even talking to anyone of the opposite sex. And of course, she was always busy working.

One day, a traveler visited the family home. Laying eyes on the daughter, he immediately fell in love with her.

They tried to elope but their girls’ parents caught them before they could flee. The girl was confined to the house.

The traveler soon gave up on her and left the area, shattering the girl’s one and only chance of happiness.

The girl’s parents grew old and eventually passed away. As the only family they had, it fell to the daughter to inherit the potion business.

This weighed heavily on the daughter, now an adult. The potions her mother made were hallucinogens.

She now understood why her parents had hidden themselves away from the world.

Along with the family business, her parents had bequeathed her a great deal of guilt… She was a grown woman now, however. She could not undo what had gone before.

Much as it pained her, the potions were her only way of making a living.

Just like her mother before her, she would spend her days breeding moths in a little hut, using their tiny scales to create hallucinogenic concoctions.

A life of isolation awaited her too.

Decade had passed since the woman’s parents had died, and she was now grown old herself, her skin covered in unsightly wrinkles.

One night, as she lay staring at a candle on the bedside table, the woman began thinking:
“Mine has been a joyless life. I have never known happiness…”

Overcome with self-pity and despair, the woman decided to burn down the hut in which she bred the moths. She would be inside it when she burned. The flames would finally put her out of her misery.

As the flames began to take hold around her, the woman stood alone in the moth’s hut, waiting to die.

Just then a curious white light appeared. A chalice was floating in front of her. It spoke.

“I can give you what you desire. Simply pay an appropriate price…”

The woman looked frantically about the hut for something to make a suitable offering. There was nothing of value. Certainly nothing valuable enough to fulfill her desire.

At that moment a man burst into the hut. The woman was taken aback by the sight of this soot-stained intruder.

It was the traveler. The one who had abandoned her all those years ago.

He had not forgotten her, and after spending so long apart, had finally decided to come back for her.

He jumped into the fire to rescue the old woman.

Though older than he’d been when they had first met, the traveler took the woman in his arms in an effort to carry her out of the hut. The woman gazed into the traveler’s face and smiled.

She had finally found something she could offer to the chalice…

The woman had courage in her conviction. Their bodies became enveloped in the flame.

Soon enough they had both turned to ash, as had the hut in which they had stood. The ash started to come together.

It was a rebirth. The woman was young once more. She had been born again.

Now she could start again. She could live a different life.

She headed for the nearby town and, after finding a place to stay, started working in a shop. She soon became a firm favorite with the customers.

Her joy was not to last, however…
The effects of her rejuvenation were only temporary, and after a while she began to age once more - and rapidly.

The woman was devastated. She was still unsatisfied. She had been unable to reclaim her lost life…

She decided to undertake another rebirth. It was simple enough. She would find someone else to sacrifice and the rejuvenating flames would be sure to restore her youth once more. 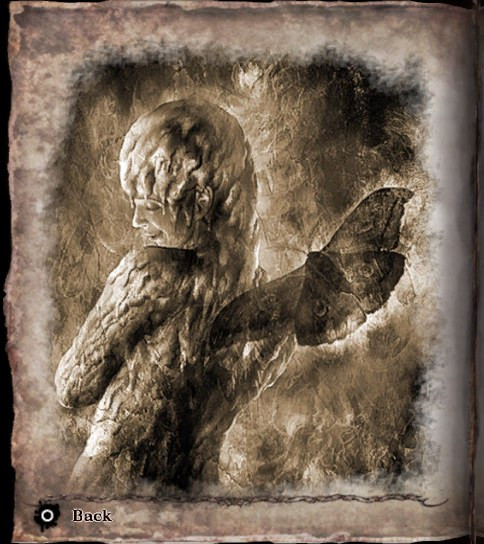 As soon as she found someone suitable, she followed them home, burning down their house with them both inside it. They were turned to ash, and from this ash the woman was reborn for a second time.

She had found a way to retain her youth.

The woman became very sensitive to any signs of aging, and as soon as she saw any she would rush back to the embrace of the rejuvenating flames.

Before long, the rapid succession of rebirths she was experiencing were actually causing her to become younger. After a while she had regressed to a pre-pubescent teenager.

She also began to change in other very striking ways. Her latest rebirth had seen her adopt the characteristics of another creature.

Her first rebirth had been from the ashes of the moth’s hut…
And this was starting to make itself apparent in the woman’s body. It was as though the moths were taking their revenge…

The woman started to panic.

She had only just managed to escape from the drudgery of her life spent among moths…
And now the blighted creatures were causing her to suffer once more.

In and attempt to erase her new moth-like features, the woman decided to undergo another rebirth. But the opposite happened. The more rebirths she experienced, the more moth-like she became.

What’s more, this constant rejuvenation was causing her to become younger and younger. By now she was little more than an infant.

She was also aging faster than ever. One minute she was a mewling child, the very next she was an old lady once more.

She continued to put her faith in the flames however. She began to subject herself to their rejuvenation ever more frequently.

After a while, the process became a constant. The woman was permanently engulfed in flames, aging at an incredibly speed before being immediately reborn again.

Having transcended death, there is no doubt she continues to roam the world to this day, engulfed in her rejuvenating flames…

Continuously reborn, a life that has no end…

Retrieved from "https://soulsacrifice.fandom.com/wiki/Phoenix?oldid=21925"
Community content is available under CC-BY-SA unless otherwise noted.