In a port town, there once lived a woman known as "the Songstress".

Her voice captivated the rugged men of the sea.

As a young girl, she was too shy to sing in front of others.

And it was a neighborhood boy who first noticed her talents.

So, her singing became a secret between two childhood friends.

Just as they began to realize their love for one another, the boy set out on his voyage fishing.

Misfortune struck as the weather turned rough. Even past dark, his ship did not return.

Giving up hope that the fishermen had survived, the townspeople headed home.

But the next morning, they beheld an extraordinary sight.

Far on the horizon, the battered ship was returning to port with the sun on its stern.

The townsfolk were greeted with another surprise.

Down at the wharf, they saw a girl singing out in prayer.

Her body chilled from the night rain, she was calling out with a voice worn from singing. 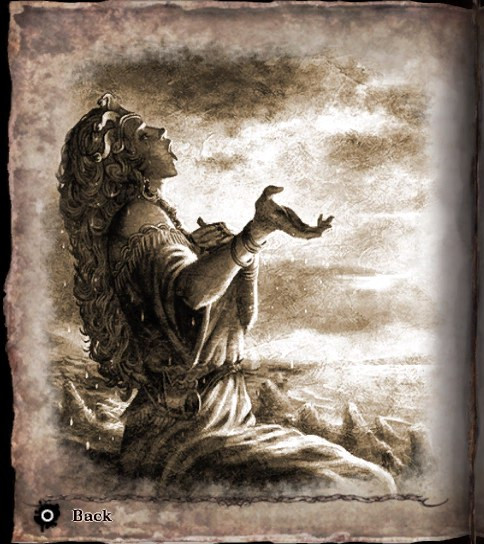 When the ship reached the harbor, the girl collapsed from exhaustion upon seeing her beloved disembark.

From that moment, she was revered as "the Songstress."

Although bedridden for a month, she suffered on lasting effects.

The boy visited every day and they pledged their futures to one another.

A few years later when the boy was fully grown, he revealed his intention to leave the town.

He told her instead of fishing he would go to study in a big city, so that they could build a stable future together.

Initially resisting the idea of their parting, she drew comfort from his words, "As soon as everything is in place, I will come for you." And so, she sent him off with a smile.

One year passed and then another until almost three years later she then heard the most incredible story.

Her beloved had married another woman - the daughter of a wealthy household in his new city.

To seek the truth, she went to his parents' home.

Choosing their words carefully, but hardly able to conceal their joy, they confirmed that they were married.

Now they too would move to the same city.

The woman fled the house and ran to a nearby cliff, a deserted spot now lit by the evening sun.

Shaken with grief, she wept terribly.

Moments later, she threw herself into the sea.

Narrowly escaping the death she craved, her body washed up on a reef.

By daybreak, nothing stirred inside her except hatred.

And so, she swore revenge.

Then a wondrous vision spread before her.

A shining white chalice hanging in the air.

It spoke to her softly, "For your wish to be granted, pay me a sacrifice."

Captivated by this strange whisper, the woman did as she was bid.

She offered up her beautiful singing voice.

In return, a song of bitter spite rolled inside her.

Her voice would charm the hearts of fishermen no more.

Now the song escaping her lips evoked misery and distress.

Rousing herself, the woman saw a single vessel leaving port.

It was the boat carrying the parents of the man who betrayed her.

Turning towards the ship, the woman sang her song of spite.

It was not long before the boat started to list, plunging into the waves.

The woman grinned with pleasure.

From her voice, there came subdued laughter.

Looking around, she saw conches lying about the reef. With mouths that now resembled hers, they laughed triumphantly.

Collecting several of them, she fashioned a giant instrument.

Perhaps one day soon, the man she once loved will return to this harbor inquiring of his parents.

When that happens, a song of purest malice awaits him on arrival...

Retrieved from "https://soulsacrifice.fandom.com/wiki/Siren?oldid=22196"
Community content is available under CC-BY-SA unless otherwise noted.