Head
Arms (both)
Carriage Lanterns (both)

And so the reign of a new king began.

The previous ruler had died suddenly without any heirs, so a courtier was appointed successor.

Though proud to have ascended the throne, when alone the former courtier trembled with anxiety.
“What if I meet the same fate as the old king?”

That unfortunate king had been the victim of assassination, an arrow of ice having pierced his brow.

The old king had in fact been a good man. But such is the life of a ruler. No matter how hard he tried, he could not please everyone.

And ultimately an enemy struck him down.

The fear grew within the new king’s breast, as a constant companion. Day by day, this fear grew, casing a shadow over all he did.

The king rarely emerged from his chamber, avoiding the company of others.

But there are times when a ruler must appear before the ruled. On these occasions, he dressed in a full suit of armor, as his enemies could strike at any moment.

But the armor did not allay his fears. In fact, they only multiplied.

He fretted constantly about the chinks in his armor. What if an assassin where to slide a blade up through and…

So he requested ever more elaborate suits of impenetrable armor. The hammering of the court blacksmiths rang out around the clock.

The king’s advisers became increasingly concerned about the monarch’s behavior. They feared the heavy responsibility of this position was altogether too much.

The king sensed the unease of his advisers, and his anxiety grew all the more.

After all, the greatest fear of any monarch is dissent from within.

The closer someone became, the more he feared them.

After all, his predecessor had been slain at the order of one of his own trusted courtiers.

That courtier had a sorcerer do his dirty work and take the late king’s life.

The new king knew this all too well.

In fact, no one knew this better than him, for he had been that treacherous courtier.

The desires and ambitions of man are rarely innocent.
When the chance came, he had betrayed  the king he had server for so many years with not a moment’s hesitation.

Now this knowledge weighed on his mind and fueled his fear. One day, someone just like him was bound to appear.

His advisers viewed his eccentric behavior with suspicion, but their  disapproval only deepened his fear and made his actions ever more outlandish.

Terrified of being poisoned, he refused all food and drink, even as his body wasted away.

And as his condition deteriorated, no doctors were there to care for him.

The king’s suspicion strengthened even as his body weakened, and he would trust none to approach him.

The  bitter irony was ll too clear. The king’s fear of being killed had brought him to death’s door.

As his  life ebbed away, he saw a strange light. A strange chalice hung in the air. It seemed to be speaking to him.

It told him that if he was willing to pay the price, he could have his wish.

The king emerged from his self-imposed solitude to the astonishment of his courtiers.

The suit of armor he wore was flawless. The thinnest needle could not have penetrated its perfectly forged folds.

No matter how hard one looked, there was no hint of a gap. Yet it was flexible and supple and didn’t hinder its wearer’s movements in the least.

He was to all intents, a small impregnable fortress.

Encased within that armor, it was clear the king had succeeded in sealing himself off from the outside world.

But there was a price to pay for this perfection.

The armor was impossible to remove.

The kind could not even see his body, safely hidden within.

But this was a price the king was more than willing to pay.

Finally, he had piece of mind. Unfortunately it would prove to be all too fleeting. As time passed, the old fear resurfaced.

Night after night he would have the same dream. The sorcerer charged with killing him would launch an arrow of ice that pierced his brow.

He would meet the same fate as his predecessor.

Even snug within that suit of armor, the fear would not leave him. For not even a perfect suit of armor can guarantee total protection.

After all, in this life there are no guarantees.

Unable to stand the fear for a second longer, the king took action.

What he did made sense only to him.

He asked a sorcerer to attempt to pierce his brow with an arrow of ice.

For the king, this was the only solution. To rid himself of his fears, he needed to see whether it could be done.

He needed to see if his armor would protect him. And he needed to undergo this ordeal himself.

The sorcerer aimed the bold of ice at the king’s brow and let fly. The force sent the king flying back, the arrow lodged in his helmet. There was no doubt about it. The arrow had pierced the helmet and must have pierced the king’s skull.

And yet, the king got to his feet.

And claimed he was absolutely fine.

He wanted to see the damage the arrow had done, but couldn't remove the armor.

He wondered what became of his body, encased as it was, for eternity. Perhaps it had undergone some miraculous transformation.

The king trembled with joy. There was no more cause to be afraid.

His relief, too, was short-lived.

This sudden alleviation of concern made the king worry more. He felt certain another fear would creep up inside him.

It seems that changing the nature of man is nigh on impossible. The one thing that sorcery cannot do.

Taking first major damage: "An assasin could strike at any moment."

After second wave of damage: "I am so afraid, very afraid."

Has same body structure and some attacks as Centaur but his element is frost. He is weak to volt. 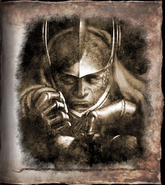 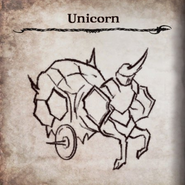 Add a photo to this gallery
Retrieved from "https://soulsacrifice.fandom.com/wiki/Unicorn?oldid=21103"
Community content is available under CC-BY-SA unless otherwise noted.