As the only child of a renowned knight, the girl had grown up wanting for nothing.

She was virtuous, cheerful and possessed of beguiling charm.

And when she came of age, offers of marriage arrived from aristocrats and royal families of every region.

Her father allowed her the freedom to select for herself whom she might marry.

But the freedom that her father had bestowed only distressed the young maid.

"Does he not care whom I marry?"

An aspect of her father's behavior had not gone unnoticed to her.

There were times, just small moments, when he did not seem to care about her.

And she knew the reason why.

As a knight, her father wanted a son to carry his name.

Her father was the sternest, most gentle and strongest person she knew.

To her, he was the very ideal of a knight, the ideal person, the ideal man.

But that which her father truly wanted...

She could never be.

This had cast a shadow over her heart for as long as she could remember.

So, exercising the freedom bestowed upon her, she came to a decision.

She decided to become a knight.

The girl wanted to win her father's approval more than anything. She wanted him to truly love her.

And so, to earn his respect, she decided to abandon a woman's happiness.

She cut off her long, silken hair and cast away her dresses. Sword fixed at her side, she enlisted for a knightly instruction.

Knowing that she could not match a man's power, her agility would be her strength. 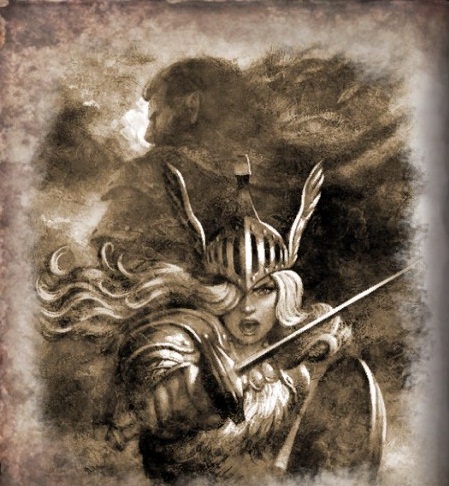 She trained to be the fastest, the most agile.

Perhaps due to her parentage, she was blessed with natural skill at arms.

After several years, her skill surpassed that of all of the knights in the realm.

She perfected her talents at 20 years old, but in doing so, she came to a realization.

Whenever she faced skilled male opponents, the disparity in strength would prove an unscalable wall.

No-one could equal her dexterity or agility, but her inability to match strength for strength was a dangerous weakness.

Moreover, with her woman's frame, it was a deficit physically insurmountable.

Years of devoted training combined with her natural talent had brought her to the peak of her ability...

But it seemed she could never become the person her father had wanted her to be.

At this realization she was cast into the depths of despair. It was then she had a strange vision.

A chalice, buoyant in the air. A voice issued forth.

"Pay the price. Do so and your wish will be granted."

Entranced, the woman accepted the offer and paid the price.

In return, her knightly skills were doubled and redoubled again.

Until then, she had been quick, but only as quick as you or I think of as "quick."

It was as if her body was a dynamo. Indeed, she was even able to produce electric shocks at will.

However, her beautiful looks had twisted into a horrible visage.

Her beauty was her sacrifice. But this was trivial now.

Now her father would acknowledge her. Now he would love her.

Reining in her high spirits, she made ready to journey to the battlefield where her father was.

However, setting out from her home, a tragic message arrived.

It was news of her father's death in battle.

She couldn't believe it.

The man she had admired and whose love she needed was already lost.

To see with her own eyes, she headed to the battlefield.

As if spurred by her great urgency, wings sprung from her armor, guiding her through the air.

Thunder boomed and lightning flashed upon the beating of her wings.

Arriving at the battlefield, she began her search.

Fallen soldiers of both armies lay there.

Silence and death hung in the air.

For three days and three nights she walked among the human detritus, but was unable to find her father, living or dead.

On the morning of the fourth day she departed the battlefield, bearing a new resolution in her breast.

She would become the most powerful warrior in the world and spread her name far and wide.

In hope that the tale of her prowess would reach her father, on earth or in heaven.

And in doing so, perhaps they would meet again...

Since then, she flies from battlefield to battlefield, challenging warriors of renown to further her glory.

These are the quests in which you will encounter the Valkyrie: 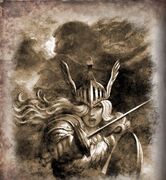 Add a photo to this gallery
Retrieved from "https://soulsacrifice.fandom.com/wiki/Valkyrie?oldid=21067"
Community content is available under CC-BY-SA unless otherwise noted.