Hood (face)
Mouth in the middle

The Wraith is one of the boss characters that is distributed as free download content. The DLC for the Wraith was scheduled for a Japanese release on May 2, 2013. The release date of the DLC which include Ouroboros and Wraith in the West was June 25, 2013. The Japanese name is "Ghost".

The woman's beauty was her ticket to a hedonistic lifestyle.

She never lacked a partner with whom to while away the early hours.

Perhaps what befell her was a form of punishment. The tab, come after a long night's carousing.

She was struck by an infectious disease.

The disease soon ravaged her body, stripping her of her charms. 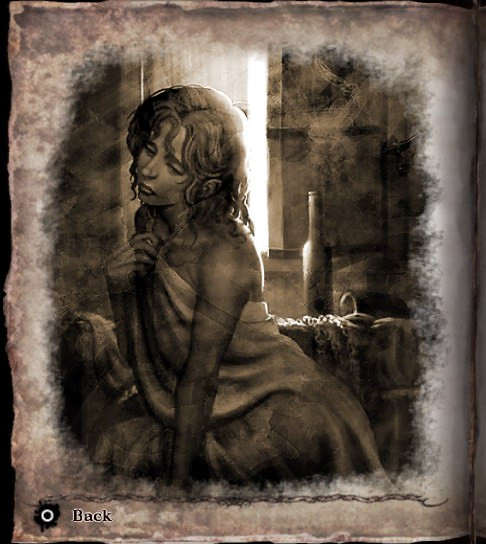 To wither away into a hideous crone while still in the bloom of youth was too much for the woman to bear.

In her bleakest moment, a strange vision came upon her.

A chalice of pure white hung in the air before her, and spoke.

"If you would elude death, forever cede your right to die."

Before giving it a moment's further thought, the woman was furiously nodding her assent.

Death is but a limitation of the flesh.

It is because we inhabit these ephemeral vessels that we die.

And so it was that the woman cast her mortal vessel aside.

She became a being beyond flesh - naught but a hazy glow.

Instantly, she knew her decision had been horribly rash.

That day began a new existence of boredom and emptiness for her.

Gone were the simple pleasures. Walking through town. Eating a hot meal. Chatting with a handsome partner.

The moment she relinquished her right to die, so too did she give up the privilege of enjoying life.

Too late she learned that life only has meaning - has worth - because it is finite. Life unending is but another form of death.

And so she was left to wander, and to curse her spectral form and her own folly.

But she had not entirely forgotten her past self. She still longed to be desired. To feel pretty.

Yet no human clothes would suit the thing she had become.

Her wanderings brought her to the doorstep of a church.

She gazed upon its large stained glass window, and was captivated.

As her fingertips played across the colored shards, they lost their hardness and became fluid and soft as a satin sheet.

She wrapped her luminous body in it, donning it as a mantle.

The light of her glow filtered through the stained glass shroud, taking on its many vibrant hues.

The beauty of it surprised even her, and for a time she was satisfied.

Memories of the days when she was still human welled up within her breast.

But what is beauty with none to behold it? She needed an audience.

Yet her voice could never reach human ears.

It was then she reached a painful epiphany.

Never before had she stopped to realize just how precarious a thing human existence is. How complex the workings of society.

Holes tore from the surface of her ghostly form, becoming giant, gaping mouths.

From them, an endless flood of sighs began to pour.

Forever deprived of death's release, she wanders the world even now...

+ The Wraith often turn itself invisible and charge at the player. When you see it do this, do not panic and roll around. Stand still and wait for it to get really close to you, then roll directly into it. Since it is moving really fast, the moment your invincibility frame end, the Wraith is already far away from you.

+ The Wraith will often disappear (you can see still see her through mind's eye) and shoot upward many little phantoms (the black ones will chase you). The ground will glow when it is about to shoot the little phantom.

+ The Wraith will stand still and shoot needles from her hood.

+ The Wraith will shoot several homing black spheres. These hurt a lot so when you get hit, do not use hit-recover(pressing any button after getting hit) to let most of the spheres touch you and disappear without further damage. 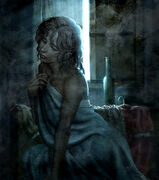 「ゴースト」translates to Ghost in English.

Retrieved from "https://soulsacrifice.fandom.com/wiki/Wraith?oldid=22071"
Community content is available under CC-BY-SA unless otherwise noted.